Another adventure that we review in a short period of time and I'm starting to think that we're back in the early 90's. Alas, that quantity of supply hasn't happened for many years, which doesn't bother us at all, let alone when there are some very solid titles on the radar for the near future, such as the new Monkey Island and Old Skies from Ron and Dave Gilbert respectively.

Born Punk by Australia's Insert Disk 22 (obvious pun from Secret of Monkey Island) is the result of a successful 2019 Kickstarter campaign and an adventure for which we had high expectations, but somewhere along the way, these were dampened. The reason is a demo of it that was released last year at Steam Fest, which turned out to be a very mediocre experience and led its creators to step up and further engage in its development. Clearly, one of the reasons for releasing a demo is to get feedback from players, however, we rarely witness impressive improvements. Born Punk is therefore visibly improved from that demo, but it suffers in some key areas of its design, and as a result it doesn't reach the high levels we might have expected.

The story takes us to the distant 2155 and Bornholm, a Baltic island near Denmark. Bornholm is a metropolis constructed as imagined in dozens of novels and films. Dark, suffocating, full of tall buildings and neon lights, but also with a population addicted to technology and its abuse, mainly in the form of implants. Nevertheless, Bornholm is not only famous for its urban layout, but for the Space Elevator, a miraculous technology from an industrial and astronomical point of view, so powerful that it makes this small island one of the major powers on the planet. Responsible for the creation of the Space Elevator is the Conglomerate, a partnership of megacorporations, which, as is usually the case, is not without responsibility for the plight of most of the inhabitants (human and android) who inhabit the city's slums. Such technology needs a pile of money, so some people will have to pay the price...

The story stars three protagonists: Eevi, Mariposa and the android Grandmaster Flash-drive. They are three completely different characters with disparate characteristics. Eevi is a dynamic, implant-filled chick living a double life, a waitress at the bar "On The Ragnarocks" by day and a hacker by night, Mariposa is the hard-nosed CEO of Mitsotomo, one of the Conglomerate's largest shareholders, while Grandmaster Flash-drive is a poor android who lives in another era, that of rap music (in 2155, apparently this genre is ancient history) and thinks he's a reincarnation of Grandmaster Flash..

These characters are united by a strange coincidence. All three are possessed by some Al, of unknown origin and identity, who claim to need their bodies for some ultimate, sacred purpose. Of course, what that purpose is is something you'll learn as you play, as long as you have the patience to get about halfway through the game, when things start to become clearer. The first few hours flow like a slog, without any particular flourishes, and we are introduced to the world rather abruptly, without any satisfactory attempts to achieve a corresponding "bond" between the player and the protagonists, so that we care enough about them.

And the idea of revealing elements of the game's lore via long texts from the game's built-in PDA is rather daunting in 2022. Personally, I never gained much interest in finding out what had happened in Bornholm in the past or what the Bucca-bot was, as I had to "wrestle" with the game's puzzles in the meantime. In the early stages of the game, the puzzles are not particularly difficult, as the controls are simple (left click for use/pickup, right click for examine), they are based on the familiar inventory/dialogue diptych, and there are several cases where the solution can be reached in more than one way (e.g. to open a locked door, we can either find its security code or hack it). However, the game requires that we first examine almost every hotspot on the screen in order for the protagonist to have an opinion on what to do, which is sometimes a bit unclear.

I spent quite some time before I realized this quirk (the first screen in Eevi's room must have taken me over an hour), as I almost always knew what I was supposed to do, but the game stubbornly refused to cooperate. Once it was understood, we encountered the familiar (unfortunate) trick of red herring items, that is items that are not used at all in the game. And unfortunately there are quite a few of them. However, in the majority of cases it's obvious which item we ultimately need, so red herrings are just an annoyance of a few more clicks in the inventory.

It's worth noting that we control the three heroes alternately, with the order chosen according to the needs of the story, while at some point their fates unite to face the common threat (?). Admittedly, that's when Born Punk starts to take over, creating a more open-ended world to roam, clearly more imaginative puzzles that often need the help of two or even three heroes at once. Of course, much to our delight, the fact that there is not just one solution to every problem remains satisfying, and the level of writing in the dialogues is also noticed to be raised. After all, Born Punk doesn't take itself too seriously in the end - contrary to what it initially seems to imply, so the humorous moments are not lacking. On the contrary, when all the heroes get together, we witness some truly hilarious sequences, starring Grandmaster Flash-drive, who is, by far, the most well-written and entertaining character in the game. So much so that I think he deserves an adventure dedicated solely to him.

This "good cop, bad cop" motif that sums up Born Punk, admittedly gave me a lot of thought about the final verdict. There are moments when the game can irritate you with its poor execution, such as the entire club puzzle sequence or the maze in the sewers (where I found the exit completely by accident), while at others it really shines with wit and ingenuity. It's as if each snippet of the game was created separately by different people and at completely different times, rather than as a single concept. And the finale is a bit "cliffhanger", as it hints at some sort of continuity, but doesn't give the heroes any sort of redemption. Even if we managed to "save" them all after making the right choices during the game.

Don't be surprised by the last sentence, as Born Punk includes a rudimentary choice & consequence system, in which the impact of our choices is not always so clear. Nevertheless it exists and perhaps creates reasons for a new playthrough, but that assumes you liked the game enough to play it again. Besides, its length isn't that long: it's difficult for a typical playthrough to exceed seven or eight hours.

In terms of technical aspects, Born Punk follows retro paths, so pixel-art in character and environment design is an one-way street. It's not bad by any means, but nothing special, unlike the voice-over and soundtrack which are truly excellent. Especially the actor playing Grandmaster Flash-drive, after he gets the two personalities (you'll know what I mean when you play the game), is simply amazing.

In short, Born Punk is an adventure that certainly had all the potential to stand out, but unfortunately it fails to impress. It undoubtedly has its strong moments, but the overall taste it leaves after finishing it is mediocre, which leads us to recommend it only to adventure game fans.

Do you feel lucky, punk?

Interesting ideas, but mediocre implementation and at times quite tedious, Born Punk is addressed only to the fans of the genre. 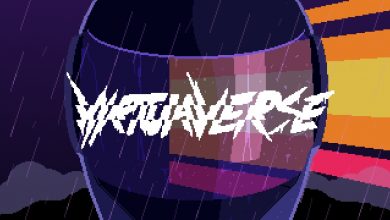