There should be a more extensive analysis/tribute/article on the games that have come to be grouped under the umbrella of the unofficial but noble genre known as Eurojank. What we're mostly interested in now, however, is the fact that Piranha Bytes as a company is probably the God-Emperor of this genre. The main Eurojank characteristics (games from central/eastern European studios with an overambitious concept, unforgivably increased difficulty compared to more "mainstream" games, mildly mediocre production values and often a plethora of bugs) can be found in pretty much all of the company's game series, and, like Gothic and Risen, ELEX could not be an exception. In this light, someone who chooses to play ELEX II, which officially launches tomorrow March 1st, is like knowing in advance the vast majority of the features he can expect from it. But is this really the case this time?

The world state of planet Magalan after the events of ELEX, the Factions that emerged or retreated into obscurity, as well as the main new gameplay features of ELEX II, have all been analyzed in our extensive ELEX II preview a few months ago, so if you want more details it's recommended that you also check that out. But let's briefly repeat some things here as well. The plot takes place 7 years after the events of the first game, with our protagonist Jax largely retired from public life after failing to unite the warring factions of Magalan against the space threat that is allegedly on the way via the massive wormhole that appeared after the defeat of the Hybrid. The start of the action coincides with the arrival of this threat, and Jax's mission is to travel around the world, talk to all the old and new "major players" and attempt to mount some sort of resistance against the alien invaders (who are given the name Skyands), even at the last hour.

In terms of gameplay, the main innovations compared to ELEX are the optimization of Melee combat and the crafting system, the introduction of a Stealth system, and the ability to fly with the Jetpack if we upgrade it with the right components. Beyond these, and various tweaks to the menus and the broader look of the UI, players of the first ELEX, and Piranha Bytes games in general I guess, will feel right at home playing ELEX II.

And this right-at-home quality is perhaps the area in which ELEX II shines. In the 80+ hours it took me to complete the game (naturally having skipped some of the sidequests, in addition to the interlocking paths depending on my choices in the Main Quest), I felt, as a PB fan, something similar to what I suppose fans of Souls games feel every time FromSoftware releases something new, meaning I had certain expectations that were met 100%.

Exploring a wide open world, with scattered secrets waiting to be discovered? Check. Unrelenting difficulty, especially in the early stages of the game, and the possibility of dying even from an oversized mosquito? Check. Plenty of quests, with the main ones having more than one path to their completion? Obvious check. Well-written and distinct Factions, each of which has its own purposes in the world, its own distinct Quests, and its own path to the Endgame? Check once again. Evolution and enrichment of the existing world Lore as presented in the series' first game? Easy check. The dedicated Gothic, Risen or ELEX fan has learned to expect certain things in these games, and ELEX II delivers those things to the superlative degree.

It is also worth mentioning that, surprisingly, ELEX II in its release version seemed to me to be practically bug-free. I don't know if I'm in the minority, but the bugs and glitches I encountered in the preview version have been resolved after the mega-patch released before the release. The only thing that reminded me of the corresponding launch of the company's older titles on PC are some occasional framedrops, or various small typical jank incidents, such as the protagonist and NPCs unnecessarily replaying random voiced phrases while wandering around the world.

But we should also take into account that games of this scope should also target a wider audience beyond the core of dedicated fans, who may ultimately be easier to satisfy. And if we start focusing on such broad appeal characteristics, some small or large cracks appear and can be pointed out in ELEX II. Regarding the wider technical aspects, chief among such cracks is the rather mediocre quality of the game's character models. There was a slight upgrade over the preview build, but even after the final pre-release update most character models admittedly look like they are worse even compared to their ELEX counterparts back in 2017, with their faces getting weird expressions when speaking and some NPCs' hands hanging to the side like bunches of grapes.

Apart from the above, which is probably just a minor issue to begin with, 2 facts should be noted regarding the game's plot itself. The first is that it seems to follow the general plot of ELEX unnecessarily closely: there we had the Elex Converters which we had to visit and disable in the course of the game, so here we have the Skyand Spires which are located around the edges of the world and which we also have to enter several times in order to disable them or for various other plot-related reasons. The second is how the quality of the Main Quests in the 2nd half of the game takes a more than noticeable dip: whereas in the first half we have to chat with factions, gain their trust and complete various errands on their behalf, after a certain point the "main Skyands attack" is supposed to take place and our missions are literally to go to various parts of the map and kill 30-40 enemies of varying strength. At this point the game started to "lose" me quite a bit, and admittedly I wasn't expecting this turn of events.

Due to my years of "involvemenet" with PB games, I may now be programmed in such a way that I can't treat ELEX II like any other RPG from any other company. Yes, the character models occasionally stand out and the dip in main quest writing is noticable. Yes, many times the plot is pushed forward via blatant "Lore Dumps" in the dialogue. Yes, the dialogue is sometimes unintentionally comical probably as a product of mediocre translation. But as I recall and delve into the overall experience in my mind, I can't help but come back to the point I've made several times so far: what I expected from the game as a PB fan, it more than delivered.

Perhaps, in the end, reviews of this kind are slightly unnecessary for games developed by companies like PB, and can be completely replaced by specific short sentences: "fans of open-world RPGs will be more than entertained by this", "fans of immersive AAA experiences expecting an extremely polished product with Hollywood-level production values will be discouraged", "fans of PB will love it". We live in a Eurojank world. Let us remain here, my friends.

Those expecting a well-polished AAA RPG experience with the highest possible production values will probably have to lower their expectations. For Piranha Bytes fans, however, ELEX II is exactly what they would want it, and expect it, to be. 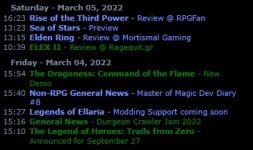 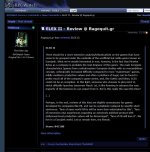 Ragequit.gr has reviewed ELEX II: ELEX II There should be a more extensive analysis/tribute/article on the games that have come to be grouped under the umbrella of the unofficial but noble genre known as Eurojank. What we're mostly interested in now, however, is the fact that Piranha Bytes...
www.rpgwatch.com
Last edited: Mar 6, 2022 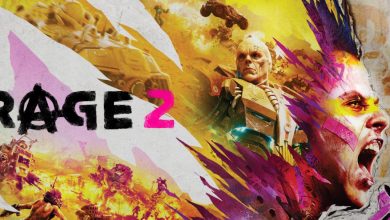 PENNY ARCADE’S ON THE RAIN SLICK PRECIPICE OF DARKNESS, EPISODE 4 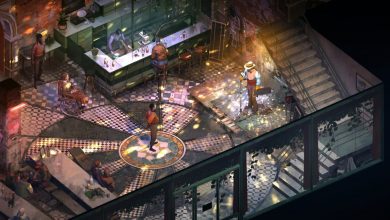