There is a saying that whoever "loses at cards wins in love". But what happens in love when someone cheats at cards? Hard to tell, but one thing is for sure, he learns a lot about his past. At least that's the claim of Nerial's Card Shark, an admittedly unusual game that teaches us that gambling is a difficult, dangerous and highly demanding profession, but one that is perfectly profitable as long as you don't play by its rules. But let's take things from the beginning.

The game is set in 18th century France, several years before the French Revolution, where we take control of a young boy working in a tavern. The boy has been an orphan from a very young age, unable to speak, and every day he works hard as a waiter for Miss Porterhouse, the owner of the tavern, who doesn't treat him very well. One fine morning, the Comte de Saint Germain (a real and notorious person of the time) appears as a customer, who notices the tavern-keeper's bad behaviour towards him and offers him a deal. To help him win the next batch of cards and in return get a share of the profits.. . . . . . (wiki )

Our hero accepts and indeed, with his subtle assistance, Comte wins, but his opponent did not take the defeat so coolly - plenty of wine and cards is never a good combination. The result of the scuffle was that Porterhouse fell dead from the musket of his opponent, who immediately fled, with the young boy now in a very unfortunate position. On the one hand because he is left without a patron and without a home, and on the other hand because he is in danger of being charged with murder and ending up on the gallows. After all, who would believe a mute boy who was mistreated (hence, he has motive) and a professional gambler of dubious morals?

Comte then suggests that he should follow him to his place of residence, which happens to be a Roma area, which ensures that he is almost impossible to be found by the French authorities. But it doesn't stop there, as Comte, realizing the boy's talent for "cheating", decides to train him as a card shark, with the ultimate goal of stealing all the foolish aristocrats who think they know how to play cards. During the course of the game, however, we realize that Comte is hiding many more secrets and that his meeting with the protagonist of the story was not so accidental...

Admittedly, the narrative part is extremely well done and very interesting. It's quite close to visual novel paths, but it's set up so aptly that it gives the impression that we're playing a first-class adventure game. Especially the Comte, who speaks incessantly and with the appropriate French politeness, is an extremely well-written character that will remain unforgettable even after the game is over. However, the narrative part is only a small part of the game that we will be concerned with - after all, with a few exceptions when we have to make some crucial decisions, all we need to do is press the button to go to the next line of dialogue.

The main game involves the...art of cheating at cards. It is worth noting that Card Shark does not require any knowledge of card games on the part of the player. Apart from the fact that there are four symbols in a deck of cards (hearts, diamonds, clubs and spades) and that the Ace is the strongest card (with the King, Queen and Jack figures following), we don't need to know anything else. The game does not intend to teach us poker or kum-kan, as at no point in the adventure is it made clear what kind of game we are playing. All we have to do is follow Comte's instructions to the letter in order to rob the world.

There are around 28 cheating techniques, ranging from "tweaking" deck shuffling and card marking to double decks and disorienting the opposing player. These techniques are implemented in mini-games that include quick-time events, but in which it is not only enough to press the right combination of buttons in time, but also to put your brain to work, so that the best combination of cards always ends up in the Comte. And there are times when we have to remember several things at once in order to get the cheat right.

For example, there are times when, as typical Comte servants, we fill the glasses of all the players at the table with wine. As we fill the glasses, we should sneak glances at the opponent's hand and then, with some signal, notify the Comte of the type of cards the opponent has. The signal can be a sweep of the table with certain gestures (e.g. clockwise means that the opponent has hearts), the touching of a glass at the base or rim, and so on. Although it is not that difficult to press the right buttons, often the situation can become quite stressful, especially since everything is done on a time limit.

Every time we apply a technique, there is a "suspicion" bar at the bottom of the screen, which rises the longer we delay in completing the technique. If we overdo it and the bar fills up, then our opponent gets up from the table in a rage and accuses us of being cheaters, which leads to two things. Either we get kicked off the table on the spot, losing all the money we had wagered up to that point, or we get killed, where we have a chance to revert back to our previous state if we come to an agreement with Death. This agreement may be to pay a price or to play a game of cards, in which we must of course cheat, but without the help of the Comte. Therefore, we have to remember some techniques on our own, otherwise we lose for good.

In order to get to the next level and the rest of the story, we need to beat our opponent as many times as we can until he runs out of money or doesn't have enough money to cover the next bet. Usually this is achieved after three or four games, and as we progress through the game, the mini-games become more and more complex - even swordplay is added to the menu. It's worth noting that victory is only achieved by following all the steps of each technique correctly. If we get even one step wrong, that particular game is lost (there is no way Comte can win if he doesn't cheat), but as long as we have enough money, we can continue.

If we fail several times and cannot cover the stake, we have the option to go back and try again, but we will have to borrow money from the Roma, to whom it is good to deposit a capital every now and then (as a bank for one thing) in order to be safe. Generally speaking, the only way to increase our capital is by gambling, and there are several "suckers" we can find: either by playing a card game on poor peasants or by playing with absent-minded aristocrats who don't know what the suit of diamonds is. But let's not go too far, because as we said, no one carries lightly when they lose at cards and the suspicion bar lurks.

However, the game understands that there's too much information building up in our heads, so it doesn't leave us completely hanging and makes sure to train us well before throwing us overboard. So at the start of each level, Comte explains step-by-step what we need to do (a detailed tutorial that is) and we have endless attempts to practice until we get it right. Only when we feel ready that we have mastered the requirements of the technique can we move on. If this happens, nine times out of ten it's a simple matter of getting the win, and amazingly some techniques (such as injogging) become our own, so we can skip several parts of the tutorials if we wish. Even more amazing is the fact that most of the cheating techniques are real-life, with all that entails...

Moving on to the technical aspect, it is worth giving credit to the artist Nicolai Troshinsky, who has done an amazing job. His painted, colourful graphics are of unique quality, truly works of art, and are perfectly combined with the realisation of the characters, which have a very particular animation style. You really can't get enough of watching them, and the same is true even during the games, where the camera zooms in and depicts very beautiful details, often with a lot of humour, especially in the grimaces of the story's protagonists.

As for the soundtrack, it includes tunes you'd expect from a game set in the mid-1700s. Renaissance-style that is, relaxing and mostly just accompanying the action - you can't play cards while listening to Ace of Spades. Voice-over doesn't exist, but Card Shark really doesn't need it. The atmosphere is perfectly successful without it.

In conclusion, Card Shark is an original game that is worth your time, even if you are not a gambling fan. The individual pieces of gameplay may be essentially quite simple (visual novel and mini-games), but they are so aptly married and combined with the witty and phlegmatic writing, they make for a very addictive game that will keep your interest until the end. And you might even learn a few more tricks along the way...

Ace up your sleeve

An original, interesting and addictive game that combines unique graphics, an intriguing story and a lot of... cheating!

Lover of action, shooter, adventure, RPG's and sometimes racing games, he prefers mainly single-player gaming. Every now and then he breaks out into a multi, but he doesn't overdo it.
View thread (8 replies) 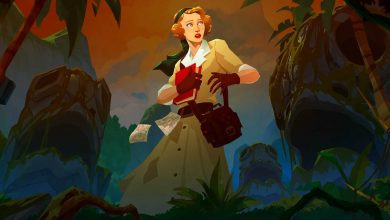 CALL OF THE SEA