We're back at it with a new Community Contest - Design a Magic Armor! It wouldn't be fair if we only gave a chance for weapons to shine now, would it? So get your creative juice pumping and your fingers cracking, you have another chance to get your design in-game!

Note: The rewards for the previous contest have been sent! If you can't find your Weaponsmith Trophy in your Profile, please don't hesitate to create a thread on the forum or contact me on Discord.

[April Contest] Design a Magic Armor!: Hey there folks, We're back at it with a new Community Contest - Design a Magic Armor! It wouldn't be fair if we only gave a chance for weapons to shine now, would it? So get your creative juice pumping and your fingers cracking, you have another chance to...

[April Contest] Vote for the C... | Forums | Solasta: Crown of the Magister

[April Contest] Vote for the Community Magic Armor!: Hello there everyone, What. A. Contest! The quality of your submissions were incredible, even more than last month. We've had a really tough time trimming our selections down to five finalists, as each of us had our favorites... and unlike in...

What. A. Contest! The quality of your submissions were incredible, even more than last month. We've had a really tough time trimming our selections down to five finalists, as each of us had our favorites... and unlike in the weapon contest, not a lot of overlap! Some of you had fantastic and original ideas that would totally fit Solasta, and trust me when I say that we've had to discard a lot of great submissions. So don't feel bad if you don't see your name in there! By the way you can always ping me on Discord if you're curious about what the team thought about your armor in particular^^

Here is a reminder of our most important criteria:

Now without further ado, here the list of the selected armors (and a shield!) for this second round (in no particular order):

Note that we have already applied a first balance pass, so they may differ slightly from the original submission. The lore may also be reworked later by our writers.

[May Community Vote] Blades of the Old Worlds - The Selection

[May Community Vote] Blades of... | Forums | Solasta: Crown of the Magister

[May Community Vote] Blades of the Old Worlds - The Selection: Contest is over, results are here: https://www.solasta-game.com/news/78-the-elven-thinblade-joins-the-armory When humans fled to Solasta it was not a matter of country or culture, it was a matter of survival. Centuries passed and... 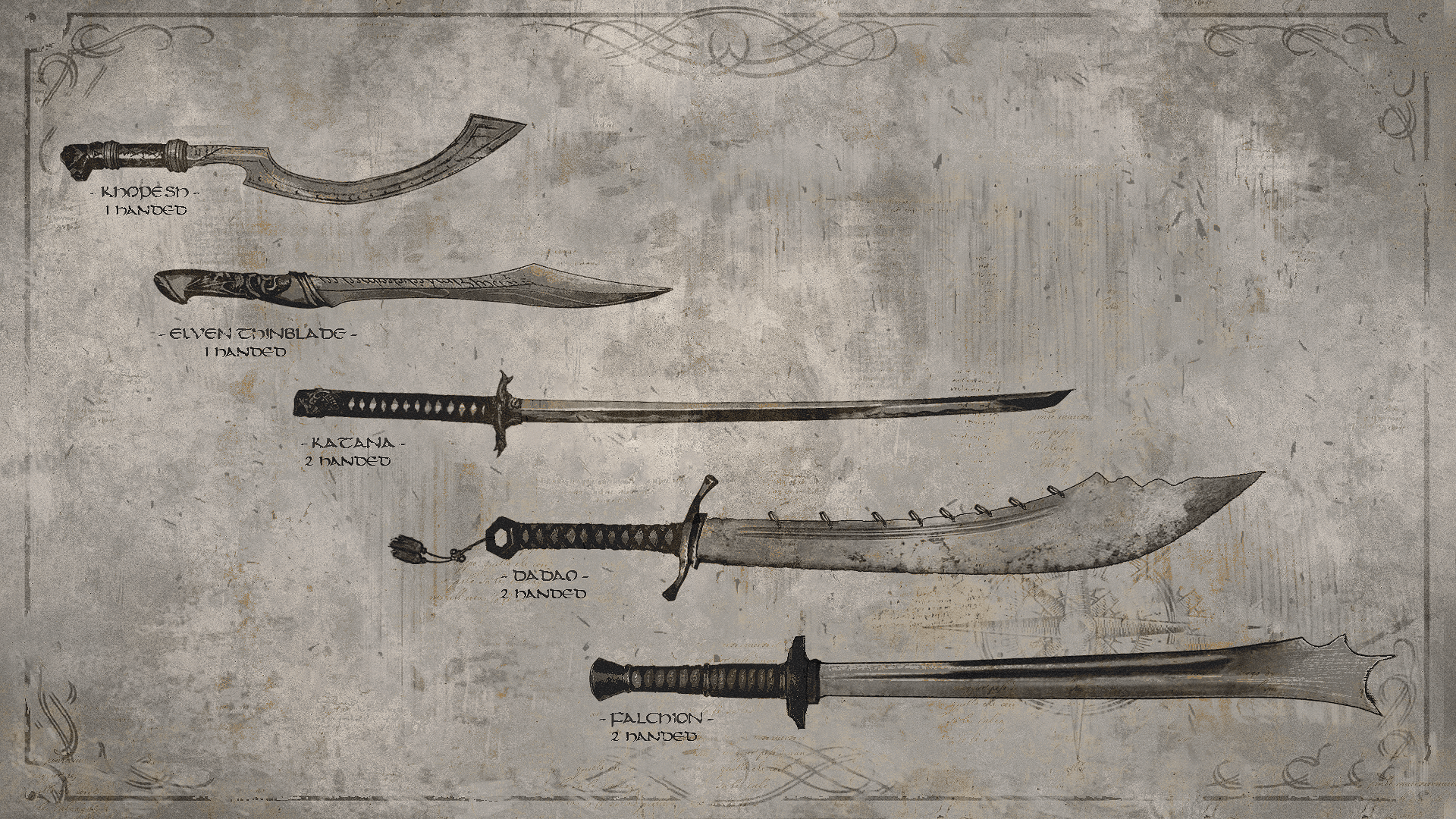 Hello and welcome to May Community Vote everyone!

This time we have prepared a very special topic for our martial-loving friends: Exotic Weapons... And more specifically, Exotic Blades. Most of those who are familiar with Tabletop RPGs know that popular settings are often based on western culture - fairly logical considering most writers and players are American & European. I think it's safe to assume that it's much easier to introduce most players to a game where they can choose between a sword or a mace and run at the enemy, rather than have to explain the difference between a shamshir and a takoba (don't ask me, I'm not a specialist).

Now, 5e has streamlined quite a few rules to the benefit of game's flow, removing a lot of obscure and very specific rules. However, there are some of us who miss the large variety of weapons offered in 3.5... which led us to think "hey, why not add an exotic weapon to our game?". And here we are, with a selection of five blades from different cultures! Of course we'd love to implement all of them, but as usual we have to be careful not to overburden our development plans - so you'll have to choose which one makes it in! Note that I am by no mean an expert in ancient weaponry, so I apologize in advance if some of my descriptions aren't completely accurate (and if so, please feel free to mention it in the comments so that I can fix it!).
Click to expand...

1) Our first contender is the Khopesh (ḫpš). A one-handed Egyptian sickle-sword which apparently evolved from battle axes, the Khopesh is truly an ancient weapon - with the earliest known appearance dating from 2,500 BC. Sharpened on the outside portion of the curved end, the inside curve of the weapon could be used to trap an opponent's arm or pull their shield out of the way. Sadly, this fascinating weapon fell out of use around 1,300 BC.

2) Our second contender is the only non-human weapon in the list. The Elven Thinblade is a one-handed weapon that can be found in ruins of the old, now defunct elven empire - more often than not imbued with powerful magic. Very light and expertly crafted, many would kill to get their hands on such a weapon (and sometimes quite literally). On Tabletop, the Elven Thinblade first appeared in the Races of the Wild sourcebook (2005), and was quite ahead of the power curve when you consider that it was a weapon that dealt 1d8 dmg (like a longsword), had a 18-20 crit range (like a rapier), was versatile (could be wielded 2-handed for more damage) AND allowed weapon finesse (to swap strength for dexterity for damage). Now before you rogues and rangers start drooling, it will most likely not be as powerful in Solasta. Consider yourself warned!

3)Our third contender is the 2-handed Katana (刀) from Japan. Amongst all the foreign weapons, Katanas are probably the most well-known: a curved, slender, singled-edged blade with a long grip protected by a guard to accommodate two hands. With that said, the oldest Katanas from the 12th century may have been quite different from the popular image we have of it, as its design evolved multiple times over the centuries. They are rumoured to be among the finest cutting weapons in history, although many contest that statement.

4) Our fourth contender is another two-handed blade from Asia, the Chinese Da Dao (大刀)... which literally means "Big Blade" (大 = Big, 刀 = Single-edged blade, although nowadays it's mostly used for "Knife"). For those who are curious, it is indeed the 刀 from Katana - there are quite a large amount of words in Japanese and Chinese that are visually the same, although the pronunciation (and even the meaning) can differ. This large broadsword is characterized by the rings on the back of the blade (note that not all Da Dao have those), their purpose left to speculation. Some believe the noise helped intimidating opponents, others that it is a symbol of honour as the noise would prevent the wielder from attacking enemies in the back.

5) Last but not least is the 2-handed Falchion. There are many different type of falchions - cleaver falchions, cusped falchions... We decided to go with the blade illustrated in the 13th century Maciejowski Bible as we loved its design - although we swapped the handle for a more standard one (the original has a hooked hilt, which most likely would have caused clipping issues with character models). In 3.5e, Falchions were like the 2-handed version of scimitars - slashing, 18-20 crit range... however they only dealt a measly 2d4 damage, compared to the 2d6 (19-20 crit range) greatsword. Not to mention they were also more expensive (75 gp vs 50 gp) and weighted the same (8 lbs)! A cool weapons that definitely deserved a bit more spotlight.

So, which one tickled your fancy? Make sure to vote now!

Hey there folks!Summer is definitively getting closer in Paris, as good weather has been blessing us these last few days. You know what they say: Sun is shining, birds are singing... Speaking of which, here are a few words from Tactical Parrot, our occasional uninvited guest to our morning...

That's right, you'll be able to create your very own party with our Character Creation Tool! Have fun exploring all the different choices and options available to you, and if you feel a bit lost don't forget to check our video Dev Diary about this particular topic
Click to expand...

The Ruins of Telema module is also back! A short 1h30 adventure featuring a pre-made party of 4 level 3 adventurers with no risk of spoiling the main campaign since it's a stand-alone module - so don't hesitate to play it! Unfortunately you won't be able to take your newly created characters into Telema since this module only supports the existing pre-made party, but the final game will of course allow you to do so.
Click to expand...

For our returning players, the Ruins of Telema v2.0 has been updated with the latest character models, facial animations, spell effects and even has a couple new features such as being able to use 'Ready Action' in combat, or lighting oil puddles from afar with Firebolt! Give it a try again, you won't regret it.
Note: Keep in mind that we're still in Alpha, so everything is far from being final! We will be adding additional customization options and quite a bunch of other features before release, but we encourage you to tell us what cool things you feel are missing on our Forums!

Talk with the Devs (Chill Stream)

Come have a chat with us on stream! Mathieu "Tactical Archimat" (Creative Director), Xavier "Zaz" (Gameplay Director) and myself Emile "Myzzrym" (Community Lead) will be streaming the Demo at the start of the Steam Summer Festival. We'll be discussing Solasta and answering questions taken from our chat for approximately two hours, so make sure you're following us on Twitch. If you don't have an account there, worry not - we'll also be streaming directly on Steam, on our store page!

Ask Us Anything on Discord!

For those who can't make it to the stream on Tuesday, we'll also be taking questions in a special channel on our Discord Server on Friday during the entire morning (US) / afternoon (EU). Anyone can ask questions! We'll be gathering all of them and answering them in a separate channel for visibility, then make a recap on our Forums!
Click to expand...

Steam Summer Festival - New Demo available June 16th!: Hello there you wonderful folks, We know a lot of you have been craving a slice of that delicious Solastan pie. We keep showing you new stuff, but screenshots and videos alone are not enough! Well, today we're here to deliver some great...