There are times when I tend to believe that fate is inevitable. I really didn't have the slightest intention of engaging with the retro rot of West of Loathing. Yes, the press release said it all deliciously. Apparently, it was a western. Also, it had a running time of over 20 hours and was graphically rendered by bejeweled, terminally malevolent daycare inmates. So I hissed indifferently when the first, second and third press releases arrived in my mailbox. I abstained, standing strong. Then, the 4K dream materialized and, selling off the Old Tower of Pleasure piece by piece, I found myself for about two weeks with only integrated system graphics.

Ignoring the Sirens who were singing to me that this unique opportunity should be dedicated to the composition of Sacred Borracho T(h)ree's lo-fi, cow punk album, I decided to dive into as much pixel art squalor as I could, for your exclusive pleasure, Glorious Reader. Which is how we got the horribly overdue presentation of the second season of the excellent The Last Door and, of course, this West of Abomination. The biggest crime that this game commits is that it forced me to neglect Hellblade: Senua's Sacrifice for more than a dozen hours and devote myself entirely to its insane, turn-based adventure RPG action. 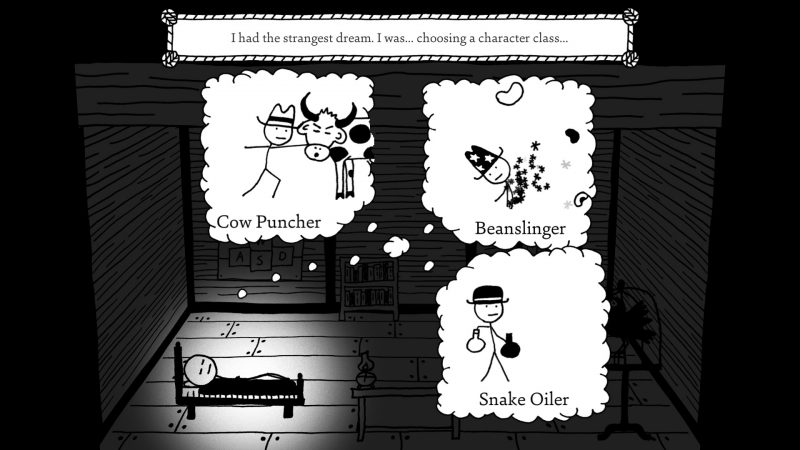 From the awesome class selection screen

West of Loathing is an epic, narrative-driven, open-world wandering RPG and the missing link in an atypical trilogy of ultimate mischief, along with the cult epic Dink Smallwood and the gritty monk pharmacist simulator, Freddy Pharkas. No kidding. The quality of the copious text and the sheer cachet of the situations we'll be called upon to deal with can only be compared to the two games above. The action takes place in some uncharted and undefined area of the West, following a catastrophic event : The Return of the Cows from the Meadow. Apparently we are talking about some very tough grass, as the cows returned angry, possessed by demons and taken over by an unquenchable hatred for miserable, burger-eating humans. Their campaign of violence and literal brutality stops at nothing. They raid farms, murder and dismember happily and kidnap people in order to sacrifice them to their dark, horned gods. The few remaining farmers hide at night, shivering in underground bunkers or huddle in desert towns, hoping to somehow manage to resist the black and white horde.

As if that weren't enough, a Necromancer has set up his hideout in the mountains and practices his unholy art of bringing back to life the desert dead. Ghostly pickles and turn snakes haunt the inhospitable roads. All seems lost. It's just the moment when a hero will get out of bed, yawn and whimper "Just a little more, Mom." It's the moment when the legend of the West of Departure begins. 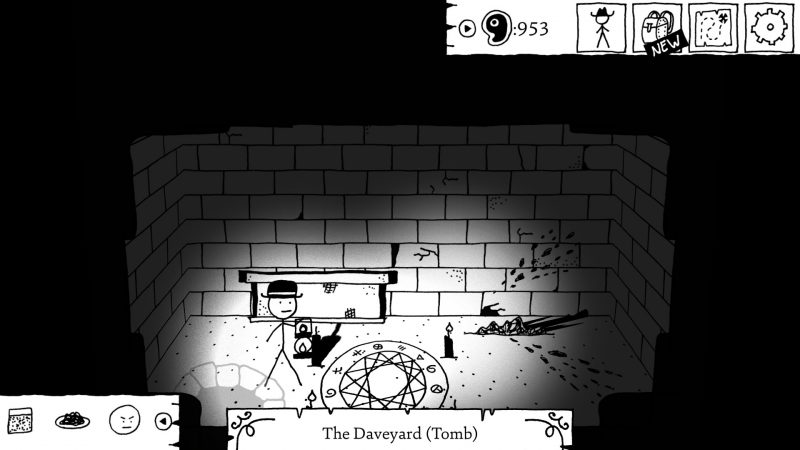 Yes, you read that right. Pickled ghosts. And this is the most normal part of West of Loathing, which does its best to be a real RPG, even if it's wearing a straightjacket and hiding in at least the fifth basement of a mental institution. We choose our character from one of the three available classes : Cow Puncher, Snake Oiler and Beanslinger, and obviously this choice has little bearing on the outcome of our adventure, for reasons that soon become obvious. While it does involve turn based combat and increasing our specific abilities by investing experience points, the sole purpose of West of Loathing is to entertain us. If we are defeated in a battle, we simply return immediately before it, with the additional perk "Angry" which makes us even more deadly and essentially ensures our ultimate triumph. The Cow Puncher is a "traditional" melee fighter, who relies on his huge fists to impose order on the Lawless Cows. 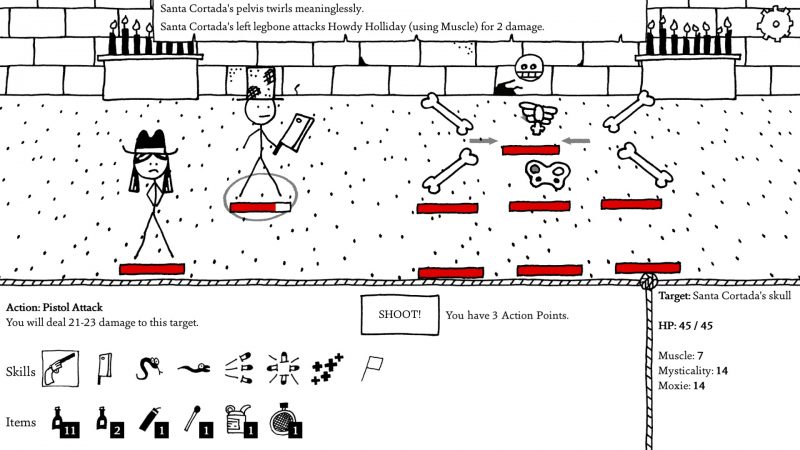 The Snakeoiler (obviously our class of choice), carries a suitcase of snakes (...) from which he extracts poisons and potions and can whip his enemies in battles with his beloved rattlesnake, causing not only damage but also poisoning them. At the same time, he also has a great talent for deceiving his enemies. Lastly, the Bean Wizard clearly draws on the Magic User's class and playstyle from the legendary Quest For Glory, as he uses ancient beanmancy spells that allow him to interact with the game world in completely unique ways.

We gain experience by literally everything: shoveling shit in the street, looking at ourselves in the mirror and muttering "what a handsome guy", learning the Ancient Language of the Dead, watering the old metal miner at the edge of the laudanum saloon, or taking down one of the many gangs of desert bandits. This experience is spent increasing either traditional skills like marksmanship, or more exotic ones like our talent for snake taming or our resistance to alcohol. In the long run we naturally end up with a demigod character who completes each battle within a round or two, but if you buy West of Loathing for its battles or for the acquisition of ever-better equipment, you're doing it a gross disservice. 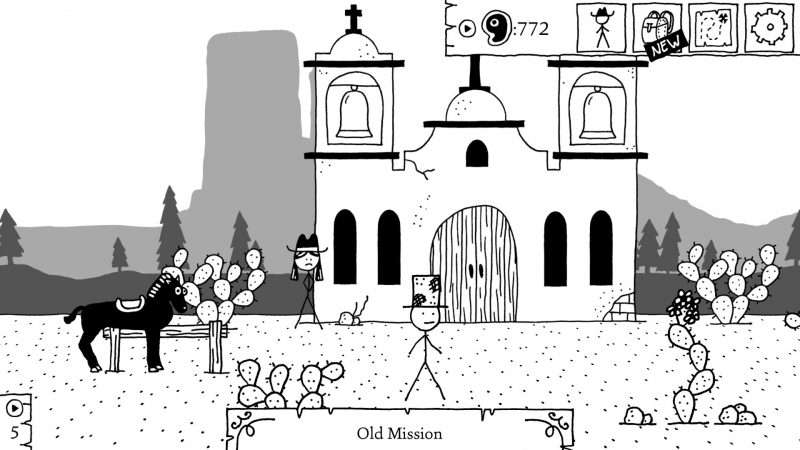 At the old mission

The game also flirts heavily with the adventure category, in the venerable framework established by Sierra On-Line with Quest For Glory I. We collect quite a few end-game items in our inventory, many of which can be used in conjunction with information discovered through our wanderings in order to resolve certain situations in truly incredible ways. While we can simply bully everyone and everything in an extremely aggressive way, puzzle solving, in addition to offering richer rewards, offers much more laughter as it gives us the opportunity to enjoy Asymmetric's creative talent in all its glory. One of the game's top puzzles involves the Herculean task of reopening a Ghost Factory in order to get quality ectoplasmic pickles back on the market. The way the game lets us know what we actually have to do, and the alternative solution it provides, knowing that we will 90% fail at the "smart" solution, is simply, genius. 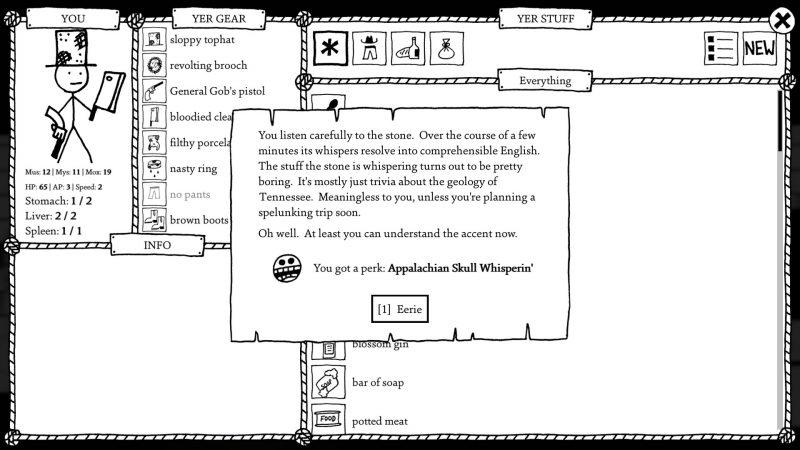 A sample of our inventory

Asymmetric delives a spine-tingling, foul-mouthed, blasphemous western parody of every cliché in the genre, relishes it and it shows in the immense care with which they've invested each of your many possible interactions with the game world. Obviously its graphics and lack of recorded speech will discourage a very large portion of the audience from engaging with it, but for the right player, they'll find here the Dink Smallwood 2 they dreamed of in school and no one ever made for them, ever. Until now. 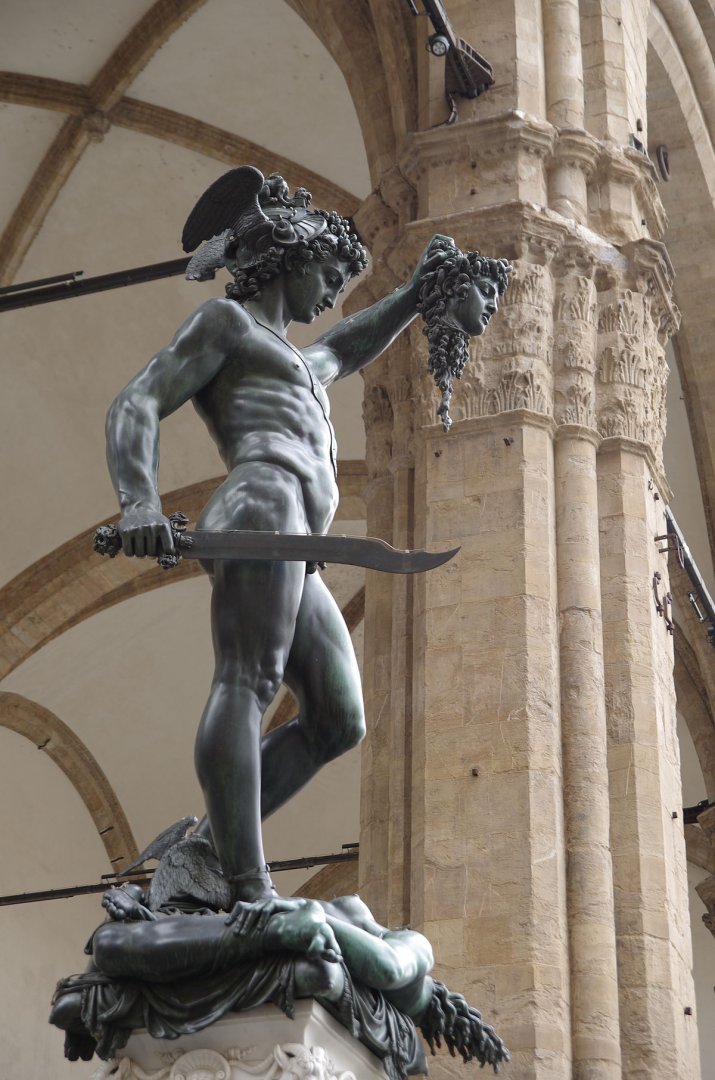 THE LOST CHRONICLES OF ZERZURA